The headstock inlay of Suzuki Harunobu's "Girl at Shrine" was a fairly close recreation of the Geisha headstock, again brighter colors were used and this time the headstock overlay is ebony rather than maple. Used the "Smoke and Mirrors" on the lamp but as an added twist I used a light sensitive inlay material for the background of the lamp so that it emits a blue glow in the dark. 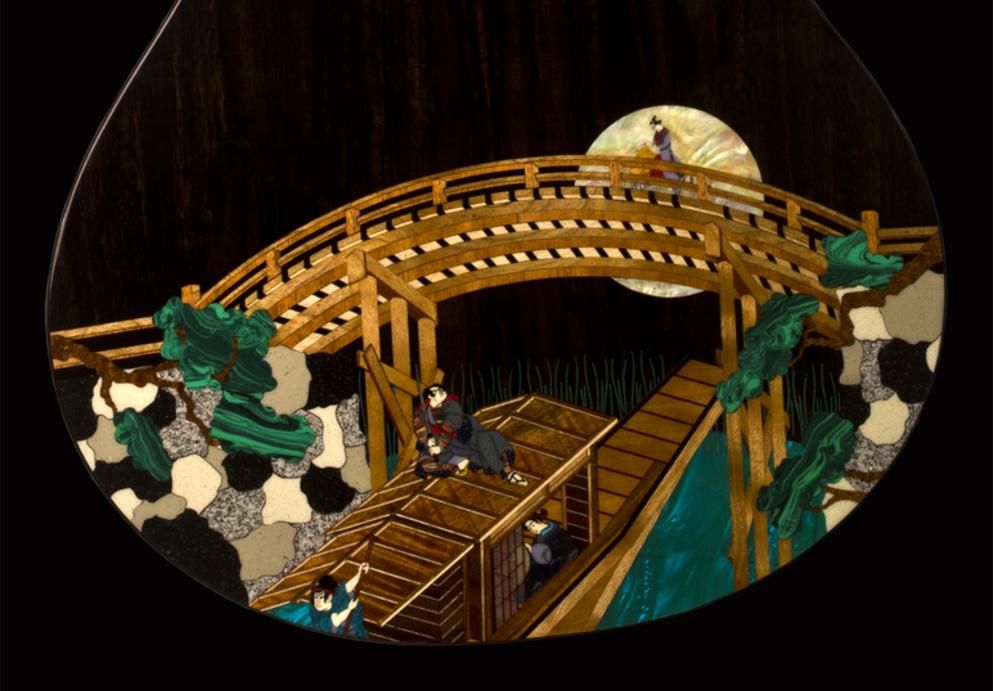 When I decided to take on this project recreating the bridge scene was a must. This time I wanted to tie it in with the first two guitars so I replaced the samurai in the boat with the geisha from the bottom of the fretboard of the Geisha guitar. I also replaced the fighting samurai on the bridge with the horse back rider from the Samurai fretboard. I also used brighter colors this time around. Again I used the "Smoke and Mirrors technique for the boat window.

The "label" is an engraving of the scene from the pickguard of the Samurai guitar. I felt it was a cool element since it's the same scene as the geisha pickguard but from inside. 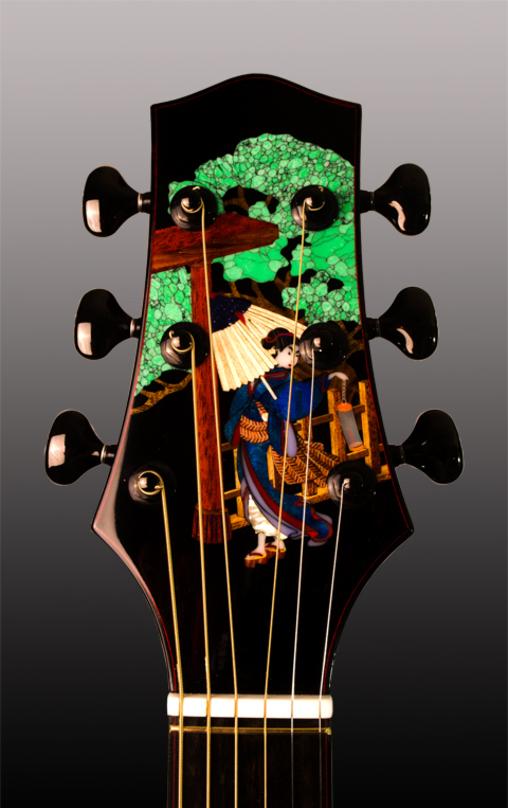 The Edo Guitar was built for an inlay exhibition at the Musical Instrument Museum in Phoenix Arizona. The museum originally asked if it were possible to have the Geisha or Samurai guitar for display but neither was available. So I decided to make a guitar that combined my favorite inlays from both guitars in a single guitar. The inlays are not exact replicas and I will try and note some of the changes with the pictures. The guitar and inlays took just under a year to complete and was finished with about 3 day to spare! I hope you enjoy looking as much as I did building and inlaying it. The exhibit was called "Dragons and Vines" and featured about 35 guitars from fellow inlay artists Grit Laskin, Rene Karnes and Larry Robinson as well as the collection of Pearlworks founder Larry Sifel which includes every PRS Dragon and several for the Limited Edition Martin guitars. The museum insured the Edo for $250,000.00 while it was there... and it wasn't the most expensive! Now that I have it back I am looking to fine a better home than my dusty shop... and yes, the price is negotiable! 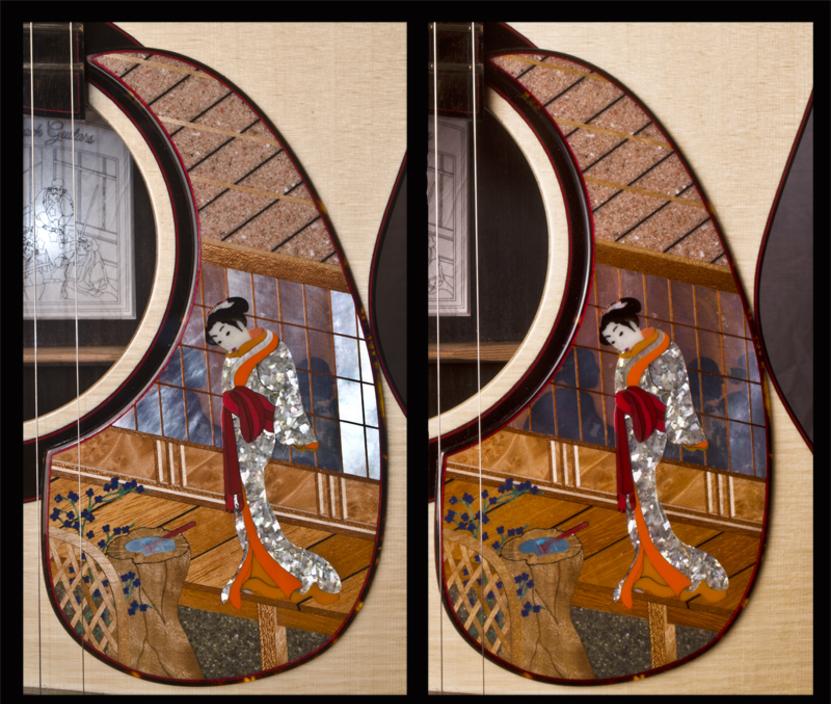 The fretboard Geisha is also a fairly close reproduction. The only major changes are the dress lotus pattern is cut from solid Mother of Pearl rather than laminated shell and the shapes are smaller (so more pieces!) I also used a new inlay material called Dichrolam for the blue and gold areas. 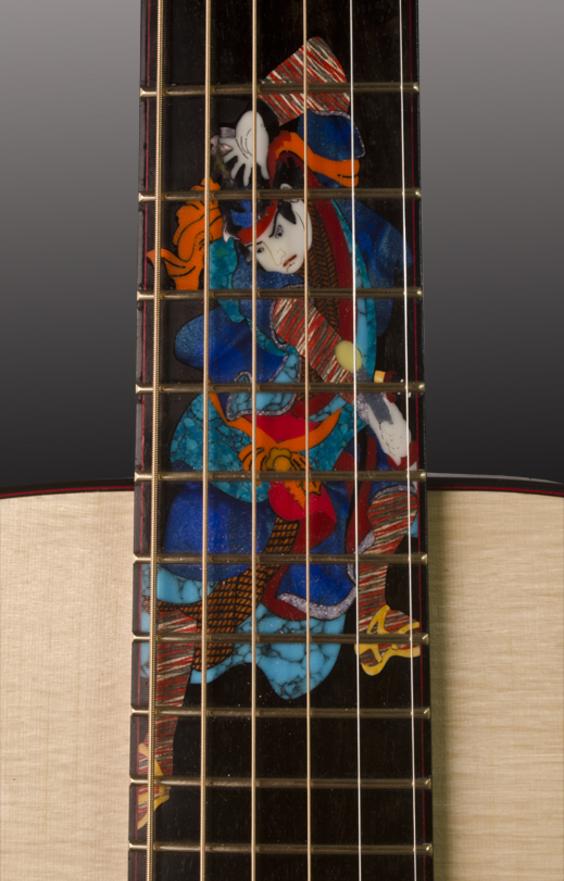 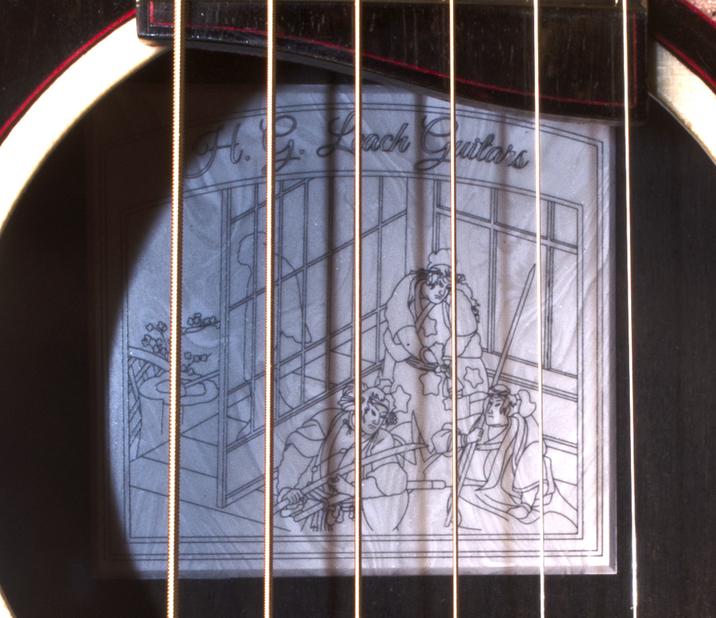 The pickguard is from the Geisha guitar. Some different colors were used and I used a material called "Sparkle" for the dress that is made from crushed Mother of Pearl shell. Again used the "Smoke and Mirrors"  for the window and the water in the stump.

This samurai was taken from the top of the samurai fretboard. I used some different colors but pretty close otherwise.