The journey of a thousand miles starts with a single step...

I cut my first inlay when I was in high school. My first "inlay" was actually a cavity the shape of a heart in a banjo fretboard made from an ill-advised cherry. Rather than actually cut something to fit I simply filled the cavity with Plastic Wood... I've come a long way since!

I got my real start with inlays while I was trying to build banjos for a living... everyone knows you can't build a banjo without encrusting it with a fair amount of shiny secretions from the ocean floor! My first attempts were with the mindset that if I couldn't play better than everybody else I could at least look cooler. It was a great plan but at my very first contest a guy by the name of Steve Arkin showed up with a banjo he had built which looked remarkably like mine... Steve won the contest and I didn't make the finals. Steve had been at it a bit longer and had played with some guy named Monroe in the early 60's... think his first name was Bill...

I still have that banjo and as I look at it I see how far I have come from the good ole days where covering as much space as possible was a priority to now where it's more about seeing how much detail I can fit into the smallest possible space. My style has slowly evolved into one where I like to see just how realistic I can make things look. I call it photo-realistic but I have been told by artists who smear around the limitless color combinations of pigments that to be "photo-realistic" it has to look just like a photo... la tee dah!

My pallet of colors is much more restricted so I guess that's never going to happen. I can't come up with a thousand shades of blue and then blend them to smoothly transition. Heck I'm lucky if I can find a half dozen materials that are different shades of blue! So therein lies the greatest challenge in "photo-realistic" inlay, finding the right materials to match the colors and textures you are trying to create. Since more often than not that material doesn't really exist I spend a lot of time making my own material by creating mosaics or custom blending things like jewelry grade epoxy or even a kids favorite, Sculpy clay. As you look through my website you will find several detailed explanations of how some of these processes take place to create the near "photo-realistic" effects that I think sets my work apart from most other inlay artist.

Thanks for stopping by, hope you enjoy the show. 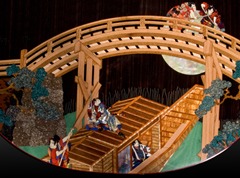